The Philippines have a tropical marine climate with a winter monsoon and a summer monsoon. Unlike the rest of the archipelago, El Nido does not experience typhoons, but is marked by two very distinct seasons: the dry season from December to May, and the rainy season from June to November. Learn with us the most important elements of the city’s weather and climate to choose your travel period!

THE MONTHLY WEATHER FORECAST: WHEN TO GO?

THE BEST TIME TO TRAVEL TO EL NIDO

To sum it up, to enjoy a pleasant climate and avoid the rainy and cyclonic season, it is better to travel to El Nido between November and May. To be more precise, the driest (and hottest) months are March, April, and May, with temperatures reaching up to 41°C during the hottest days. If you are not afraid of the hot weather, these are the months we recommend for a trip to El Nido.

The average temperature of the water varies between 24°C and 26°C between December and March, and between 26°C and 29°C from April to November. Divers will enjoy underwater visibility between 10 and 30 meters from March to May, making this season the ideal time to practice this kind of aquatic activity.

Please note that all this information is based on weather forecasts and that it is not an exact science. The actual conditions might be slightly different. 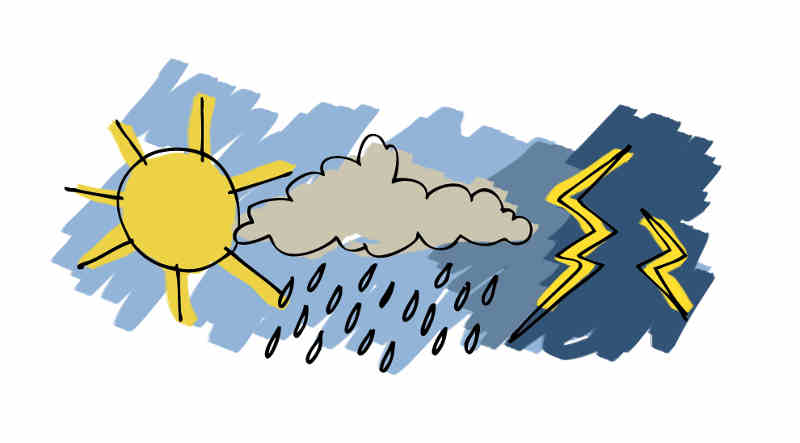 The northeast monsoon, locally known as “amihan”, affects the island of Palawan from November to February, bringing cooler and drier weather. From June to October, the southwest monsoon, called “habagat”, causes heavy rain and strong wind on the island. Unlike the rest of the Philippines, Palawan does not experience typhoons.

NOT VERY COLD DURING THE COLDEST MONTHS

A PERFECT DESTINATION FOR SCUBA DIVING

Apart from its incredible biodiversity, another advantage of diving in Bacuit Bay is that there is not much current. It obviously varies according to tides, but it means that divers can generally reach their boat without too many problems. In addition, the temperature of the water is very pleasant throughout the year. From December to March, the average temperature of the water varies between 24°C and 26°C, and from April to November the average temperature goes from 26°C to 29°C. Finally, the underwater visibility is also very good for scuba diving, as it goes from 10 to 30 meters between March and May.

IDEAL FOR A RELAXING HOLIDAY

No typhoons, a rainy season with not much rain, a pleasant water temperature, lots of sun… The climate of El Nido is really ideal for a nice and relaxing holiday.